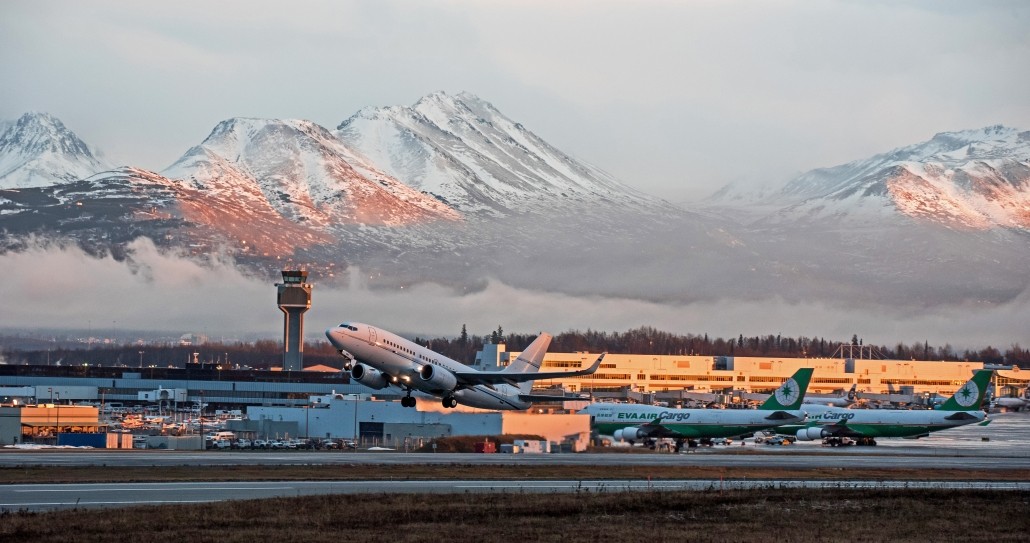 Normally ranked as the fifth busiest cargo airport in the world, the Ted Stevens Anchorage International Airport [ANC, PANC] continues to be a pivotal hub for facilitating international cargo operations. With growing demand for air cargo capacity worldwide, operations have recently spiked at the airport, making it the world’s busiest today.

As North America continues to manage the COVID-19 outbreak, the airport is expected to keep playing a key role in supporting cargo flights, especially those coming from Asia where most critical goods and medical supplies are produced.

Located at the top of the world, the airport is equidistant from Europe, Asia and North America, which allows air cargo operators operating from ANC to reach 95% of major global markets in less than 10 hours.

Due to this advantageous position, it is estimated that 80% of cargo flights stop over at ANC for refueling, cargo transfer or shift change of aircrew.

Performing technical stops at ANC also generates fuel savings while increasing profitability. Cargo carriers operating to ANC can bring more cargo while consuming less fuel, since they can refuel at the airport before proceeding to their next destination using a shorter route.

Aside from its strategic location, ANC offers unique cargo transfer rights to operators, as authorized by the United States Department of Transportation in 2003.

These cargo transfer rights allow cargo operators to facilitate transfers during a technical stop, including cargo transfers between aircraft from the same carrier; transfers from one carrier to another; co-mingling of US and non-US cargo; and change-of-gauge transfers, which refer to a switch of aircraft but use of the same flight number.

In 2018, airport authorities revealed their plan to build an onsite Quick Cargo Center, which will temporarily store shipment brought by cargo carriers but needs to be transported by a different aircraft via a connecting flight. The facility is envisioned to be climate-controlled, fully secure and with easy access to aircraft parking sites for easy cargo haulage.

While being one of the top cargo airports in the world, ANC also manages a substantial number of passenger flights. It serves 21 domestic and international passenger destinations and managed almost 5.7 million passengers and over 42,000 passenger aircraft landings in 2019.

With a stunning skyline, majestic mountain range and beautiful national parks offering a mix of exciting activities, Alaska is a growing tourist destination. As such, passenger flights are expected to pick up at ANC in the near future. Meanwhile, the airport has amplified its sanitation program, including using hospital-grade disinfectants and ultraviolet LED lights to sanitize escalator handrails.

Jetex provides seamless global cargo solutions anywhere in the world. Get in touch with Jetex to know more.