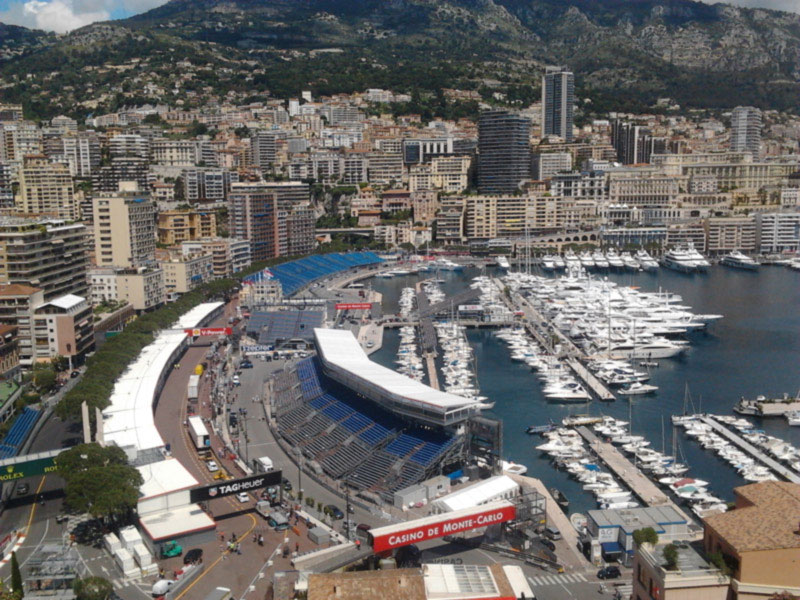 Every Spring, Monaco turns into a street-side raceway. The city is part of the annual Formula One circuit, having become a legendary raceway that offers gorgeous vistas alongside breathtakingly fast cars.

And when the race cars come to town, so do the world’s rich and famous. Monaco, already one of the world’s richest cities, will once again see an influx of yachts and airplanes shuttling in spectators. In other words, the Monaco Grand Prix is a spectacular luxury travel experience.

Regardless of season, Monte Carlo is an ideal luxury travel destination. The kingdom on the south-western tip of France is located on the coast of the Mediterranean sea, offering beautiful vistas and a harbor marina notorious for its luxury yachts.

Every conversation about Monte Carlo has to begin with its world-famous casino, which first opened its doors in 1862. It has attracted tourists and gamblers from around the world for more than 150 years, gaining popularity among ruling families in Europe and wealthy travelers alike. Its frequent appearance and references in blockbuster movies like the James Bond franchise only add to its fame and mystique.

Interestingly, the casino – owned and operated indirectly by the government – forbids Monaco citizens from entering. As such, it draws its income exclusively from foreigners, and as a result has been a major contributor to the region’s wealth.

If gambling is not your thing, consider visiting the Oceanographic Museum instead. Here, you can watch 4,000 species of fish in their (simulated) native habitat, including a shark lagoon that allows you to see the world’s most notorious aquatic predators up close.

Balmy temperatures that generally stay around 70 degrees even in Winter make the city a perfect travel destination year-round. But you will get most enjoyment out of Larvotto Beach, named “the world’s most glamorous beach” by the Travel Channel, during summer. Here, mingling with the rich and famous becomes a daily occurrence. And when you need a comfortable place to rest after a busy day in the city or at the beach, world-famous hotels like the Hotel Hermitage and the Hotel Metropole await travelers like you.

Of course, Monaco also hosts a number of world-famous events during each year. Each January, the International Circus Festival takes place in the city, inviting the world’s top jugglers, clowns, and trapeze artists for a memorable show. March’s Rose Ball sees the world’s Royalty get together for an event that seems straight out of a more romantic past.

And then there is the Monaco Grand Prix, perhaps the single biggest reason for Monte Carlo’s fame around the world.

The city of Monaco has been home to a race since 1929, when cigarette magnate Antony Noghès invited 16 racers for the prospect of 100,000 Francs. What made the first race memorable was the road itself: instead of a dedicated race track, drivers had to navigate the streets of the city to determine the victor.

This style of race was not uncommon for private races like the first Monaco Grand Prix. But in 1950, when the Formula One competition made Monaco one of its original stops on the way to determine the inaugural World Driving Champion. In the 66 years since, Monaco has been a stable in the annual Formula One contest with only minor track changes.

In fact, in the decades since its first race, Monaco has entered the pantheon of famous car races. It is widely considered a member of the racing “Triple Crown,” alongside the Indianapolis 500 and the 24 Hour Race in Le Mans. And its appeal, now as it was then, remains the track itself: racers in some of the world’s fastest cars navigate the narrow city streets on their way to competing for the Monaco Grand Prix and valuable championship points.

Due to this unusual track, the race carries more excitement for casual spectators than other, more technical tracks around the world. The difficulty of turns like the famous Hairpin is legendary, forcing drivers to slow down to 31 miles per hour before they can speed up again to usual speeds of up to 200 mph under the breathtaking vistas of the half-open Tunnel.

Many racers consider Monaco to be the most difficult race of the year, which explains why the crash rate is much higher than your average Formula One race: famously, only 4 of the 22 drivers finished the race in 1996, and the span between 2000 and 2004 had more than 10 drivers cross the finish line only once.

Needless to say, its notoriety as a race has also attracted some of the world’s most famous car drivers to compete. Race track legends like Ayrton Senna, Graham Hill, Alain Prost and Michael Schuhmacher, the record holder for Formula One wins, all laid claim to the Monaco trophy multiple times during their careers. They were all handed the winner’s emblem by the city’s royal family, who to this day organizes and oversees the famous race.

Monaco has become so interwoven with racing culture that over the years, many Formula One drivers have made it their home. Senna famously retired to his apartment after crashing out of the race in 1988 to watch the end of it from his balcony. He joined countless race fanatics and casual observers, who enjoy their time in the sun while watching the race from their yachts (available for rent just for the Grand Prix), hotel balconies, and public plateaus.

Thanks to its relatively remote location, the best way to travel to Monaco – other than taking a ship through the Mediterranean – is via plane. While the municipality does not have its own airport, the closest one is Côte d’Azur Airport (IATA: NCE; ICAO: LFMN) in nearby Nice.

From the airport, Monaco is only 20 miles, or 30 minutes away. If you don’t want to take the public bus into Monaco, we can help you rent a luxury car – or get you into the city in style, with a chauffeured limousine or Rolls Royce.

Flying into Monaco, after all, should be pleasure. The city is a meeting point of celebrities and members of royal families throughout the year, and that reputation increases exponential when the Grand Prix comes around. This year, the favorite to win in the May 29 race is the German Nico Rosberg, who has won the past three years in a row and came in second for the Formula One World Championship last year. But regardless of who gets the trophy in the end, all spectators will feel like winners thanks to a luxury travel experience like no other.

In short, the Monaco Grand Prix is among the most famous events of the sporting year – both because of its unique racing structure, and because of the stunning, one-of-a-kind location. Both make the event a magnet for the world’s celebrities. So if you are looking to organize luxury travel, this location and event should be on your radar.

To learn more about the Grand Prix and how to get your travelers to the event, contact us. As an IATA-accredited organization and a member of the ACTE, we are ready to make your luxury travel plans a reality.