With around 90 million visitors every year, France continues to hold the number one spot among the most visited countries in Europe. Aside from attracting tourists from all over the world, France is playing a major role in Europe’s business aviation industry.

The French air network is broad and diverse, with 264 airports with business aviation traffic, making all French regions easily accessible by air travel.

To operate to France smoothly, here are some important details you need to consider.

Parking is usually available all around France. Major hubs can restrict parking for 24 hours or less due to high activity, with possible extensions under special circumstances. During special events, it is best to arrange slots and requirements in advance.

We also provide ground and operational support at the following key locations in France, giving us nationwide coverage for business jet operations: 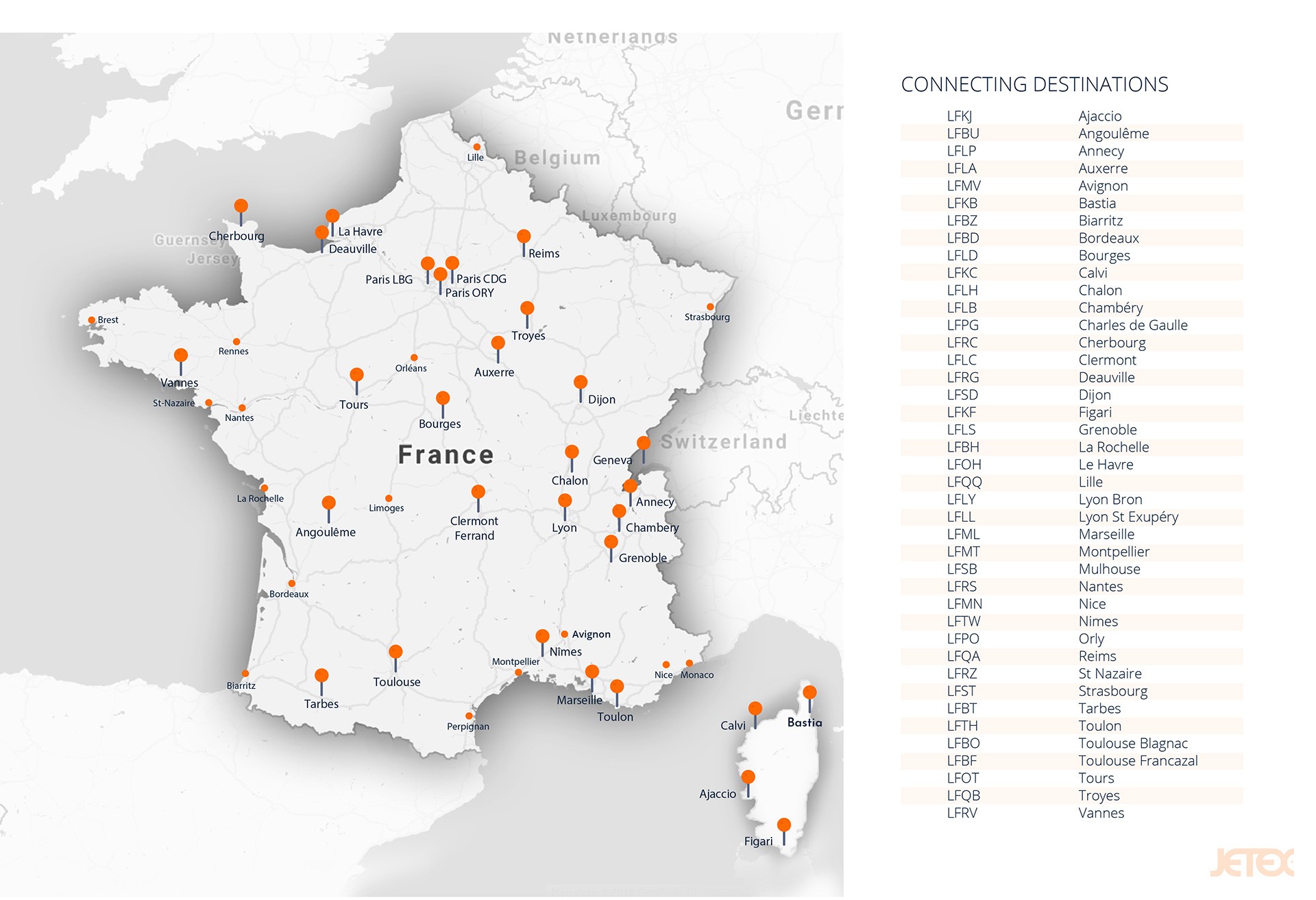 Most airports have FBOs available. Major hubs such as LFPG, LFPO and LFLL do not have a dedicated General Aviation Terminals, but diplomatic and/or VIP lounges are available. Selecting Jetex as your ground support provider assures you that you will enjoy a seamless experience even at stations that are originally not meant for Business Aviation.

Regional airports do not have full Ground Support Equipment (GSE), but regular handling for business jets is possible.

The French network is very efficient and well-served, therefore a fuel release request is usually sufficient. However, some agents may require a confirmation copy from the fueler to start refueling.

Smaller airports generally work with one fuel company where previous arrangement has been made. Most airports accept fuel cards, credit card or even cash payment if the amount is not too high.

The Air Operator’s Certificate (AOC) must always be presented to the fueler and the Person-in-Charge has to make sure the correct boxes are ticked according to the flight type, as processing claims once the delivery ticket has been signed can take long.

All transport types are widely available in France. Regular taxis paid through Jetex can be arranged for crew, while limousines and luxury vans for crew and passengers are also available.

Moto taxi can also be arranged in Paris, in case of traffic jams. Helicopters are another option and are commonly used for passenger connections at LFPG, LFPB, LFMN, LFML, LFMD, LFLB, LFLP or LFLS.

Any non-EU operator that intends to perform a commercial flight operation into, within or out of any of the following territories requires a Third Country Operators (TCO) authorization issued by the European Union Aviation Safety Agency (EASA):

Landing permits are required in France for non-Schengen operators. These requirements do not apply to private operators with non-revenue purposes. These permits are relatively easy to obtain with an official lead time of four business days.

The French Civil Aviation Authority (FCAA) operates from Monday to Friday 0900 to 1800 LT.  Outside operating hours, a permit is available only for urgent flights (medevac included).

All these procedures can be arranged by Jetex on the operator’s behalf. Permits for France are valid up to or within 72 hours; notification to the French CAA is only required for change(s) of inbound or outbound destination, registration or purpose of flight. The change is not required if the schedule update is made within 72 hours of the first approved schedule.

For modifications beyond the validity period, a revision request is needed, and this request is usually processed within 24 hours.

Customs, immigration and quarantine (CIQ) are cleared within the FBO or at the main terminal if there is no general aviation terminal at the airport. At the FBOs, the clearance process is quick if all the documents have been submitted beforehand. At the airports without a dedicated general aviation terminal, the customs are cleared directly at the immigration desks accompanied by a staff member.

General Declaration (GenDec) copies including passport details submitted 24 hours prior to arrival are requested in a growing number of stations now. Failure to send these before arrival or departure could slow down the CIQ process, or even risk your flight getting refused at some stations if prior notice with all the pax/crew details has not been provided on time (LFTH, LFOH, LFSD, etc.).

For info on specific locations that require prior notice for customs, please feel free to contact Jetex at france@jetex.com.

Foreign visitors must have a “short stay” visa (Type C) to enter and stay in France for up to three months. This “uniform” visa is common to Schengen States and allows the holder of the document to stay in France and in other Schengen countries, with some exceptions.

Crew may enter provided they have GenDec, valid passport and crew ID during the private jet turnaround and as long as they stay at a hotel within the airport’s vicinity.

A passport must be valid at least three months after the expiration date of your visa and has been issued for less than 10 years.

A wide range of hotel options is available in France, including many international chain brands. Budget for approximately EUR 100-150 per room per night for regular crew accommodation. Rates at four-star hotels range between EUR 150 and 250 per room per night.

Rates increase during special events, especially in major cities such as Nice during the Monaco Grand Prix, the Cannes Film Festival, or during the Paris Fashion Week or Paris Air Show.

During these periods, advance hotel room reservations are highly recommended.

In-flight catering services are excellent in major airports and can be provided within short notice. With Paris being the capital and the most attractive city in the country, catering can be arranged directly with top restaurants or luxury palace hotels.

In smaller airports, a 48-hour prior notice is sometimes necessary. Jetex has a wide range of carefully selected providers and can help with catering requirements throughout France.

Technical stops are not an issue in France, as major airports are fully equipped and can handle any aircraft within short notice.

France is a safe country. All airports are secured, with adequate fencing and airside access controls and electronic surveillance.

Overall, Metropolitan France enjoys a mild climate. There are differences depending on the season and particular regions.

In order to reduce noise exposure, the Ministry of Transportation took decrees restricting the traffic at LFPG, LFPB, LFLL, LFBO and LFMN. No flight is allowed during nighttime for certain aircraft types. Contact Jetex for more information on this regulation.

During winter, LFLB, LFLP, LFLS, LFLY and LFLL experience a surge in traffic. Quick turnarounds are often imposed at LFLB during this period due to high demand, especially during the weekend; therefore, advance requests are necessary.

LFMN and LFMD are also very busy during summer. As the closest airport to Monaco, parking can get congested at LFMN during Monaco’s Grand Prix or Yacht Show.

During the Cannes Film Festival, slots can fill up quickly at LFMD but parking is usually available. Additionally, LFMD accepts aircraft up to MTOW 34T. Using LFMN as an alternate for slots and parking also leads to airport congestion, leaving operators the option of parking aircraft at LFML, LFTH, LIMJ or even further at LFTW.

Corsica, and especially LFKF, is highly popular in summer, so only short turnarounds are usually possible at LFKF during this period. Alternate parking or full handling can normally be confirmed at LFKJ, LFKB or LFKC.

Most population in France can speak English, so communication rarely poses a problem.

You must declare capital, securities, such as shares and bonds, and assets such as gold and silver coins that are worth more than EUR 10,000 (or its equivalent in other currencies). Proceed to the Customs office to carry out this declaration (01-48-62-54-44).

It is strictly forbidden to import counterfeit goods, drugs and psychotropic drugs as well as endangered species of fauna and flora. To know more about customs rules and regulations, please refer to this.

Animals without the necessary certificates will be returned to place of origin most of the time. The regulations below also apply to pets traveling between metropolitan France, French Overseas Departments, French Overseas Territories or transiting if they leave the airport.

Cats and dogs are subject to special regulations (EC) No. 998/2003 of the European Parliament and of the Council. Passengers are advised to telephone 33-1-49558472 for more details. You may also find more information here.

Jetex France comprises a team of experts with in-depth knowledge on the country’s expansive and complex airport network, making us your reliable partner when planning your flight to France.

Jetex has 17 locations in France and countrywide presence through our partners, allowing us to meet your trip planning, flight support and physical supervisory requirements anywhere in the country. 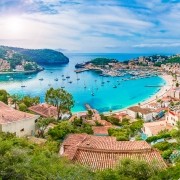 Top 10 Summer Destinations in 2020: Where Can You Travel Next? 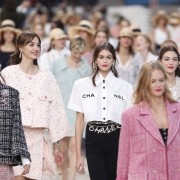 Paris Fashion Week 2020: How to Arrive in Paris in Style