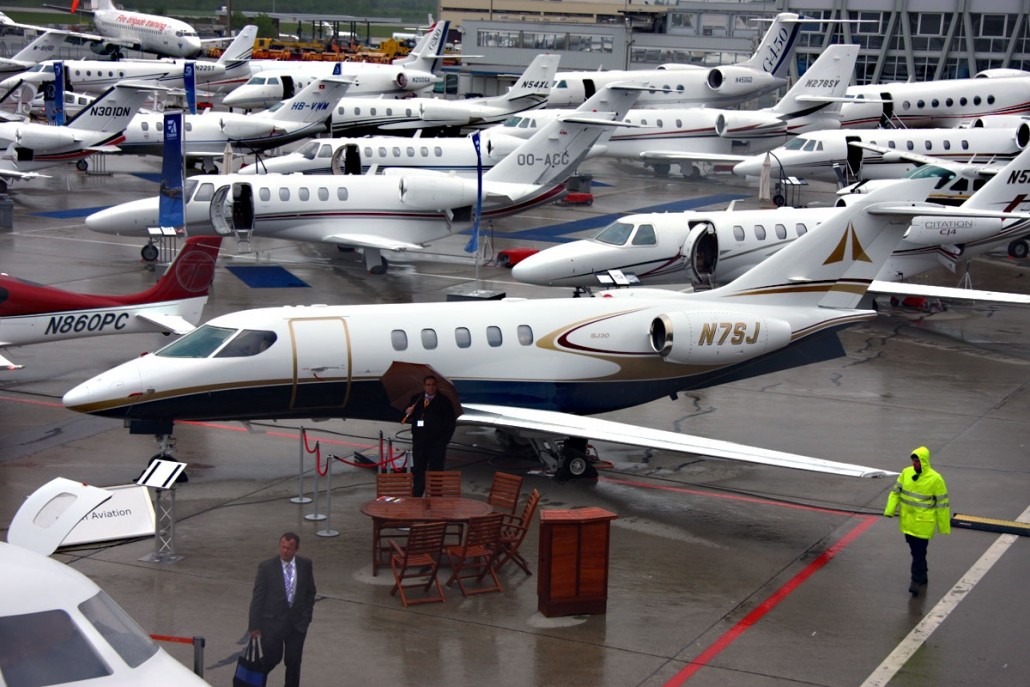 Thousands of customers and business aviation professionals gathered in Geneva, Switzerland for the 2015 European Business Aviation Conference and Expo (EBACE) last week. The event marked the event’s 15th anniversary – and Jetex was there in full-force.

“EBACE remains a forward-looking event, which is why it will always be a can’t-miss show on the industry’s calendar,” says NBAA President and CEO Ed Bolen.

This year’s edition drew 500 exhibitors and boasted nearly 60 aircraft on the static display. A highlight of the event was the many aircraft manufacturing companies that debuted new aircraft. For example, the Citation Latitude got to show off to potential customers as it made its first public appearance. The jet is the widest Citation in the Cessna fleet and has a range of 2,850 nm. In addition, the Cessna Citation CJ3+ business jet was on display in Europe for the first time.

HondaJet, which is currently in the middle of a world-tour, made an appearance at EBACE. The light jet, which is manufactured by the Honda Aircraft Company, is set to receive Federal Aviation Administration (FAA) certification in the next few months and a European tour was scheduled to launch post-EBACE.

“We have been extremely pleased with the performance and reliability of the HondaJet during the world tour and are excited to bring the aircraft to Europe,” says Honda Aircraft Company President and CEO Michimasa Fujino.

Other OEMs announced that new aircraft were progressing through the stages of development. Gulfstream, for instance, says the work on next generation of the Gulfstream G500 and G600 are moving forward. Both debuted last year and testing continues on the new advanced aircraft. The G500 should be certified in 2017, with the G600 following in 2019.

French manufacturer Dassault Aviation says it is continuing to test the Falcon 5X and Falcon 8X. Three Falcon 8X have been produced and are being run through a series of flying tests. The 5X should make its maiden voyage this summer and is currently undergoing ground tests. The 8X is expected to receive certification in 2018.

Finally, Formula One Grand Prix great Niki Lauda signed a contract to purchase a Bombardier Global 7000. The jet is under development, and Lauda hopes to take delivery of the new plane in 2018.

“As soon as I saw the Global 7000 I knew I must have one,” said Lauda during a press event.

The other big topic at EBACE was European aviation regulations. There are a lot of new regulations coming down the pipeline in Europe and aviation professionals need to be aware of them.

Rules that require the implementation of ADS-B were delayed in Europe. They now must be implemented by June 8, 2016 for new aircraft and June 7, 2020 for older aircraft. ADS-B, Automatic Dependent Surveillance – Broadcast, is a system for air traffic surveillance. With ADS-B, an aircraft broadcasts its GPS position. Information like heading, ground track, ground speed and altitude are also broadcast. Receivers on the ground then receive this information and send it to air traffic control displays. The ADS-B information can be used to augment existing primary and secondary radar or used in lieu of those radar technologies.

As numerous older aircraft still need to install the avionics, the waiting list to do the upgrade is growing. For this reason, Jetex highly recommends that aircraft owners and operators schedule the work sooner rather than later if they plan to operate in European airspace after the regulations are implemented.

Europe has also extended the deadline for cockpit voice recorders and underwater locator beacon installations. By January of 2019, cockpit voice recorders must have a minimum 15-hour recording time for large aircraft (MTOW> 27,000 kg) and two hours for smaller aircraft. By January of 2020, CVRs and FDRs must have underwater location devices that broadcast for at least 90 days.

As part of the overall process of advancing new regulations, the European Aviation Safety Administration (EASA) is poised to extend the scope of its reach and influence on aviation. According to the NBAA, EASA “is taking on a more comprehensive role in overseeing aviation throughout the Europe. The agency has issued numerous documents this year with potential impact on business aviation operations.”

Needless to say, this news had people talking at EBACE. More so, according to the NBAA, research and development, airports, air traffic management, security, among other things are all under consideration for inclusion in an EASA mandate.

Finally, after Dec. 31, 2017, all aircraft radios operating in Europe must be 8.33 kHz-capable. An aircraft may not fly IFR in Class A, B or C airspace unless it’s 8.33-capable. For most business aircraft this is a non-issue, but something to be informed about nonetheless.

Regardless of what kind of aircraft you fly, if you’re operating in Europe change is in the air. To ensure your operations are smooth and hassle free, be sure to contact your local Jetex Flight Planning Professional before you take to the skies.